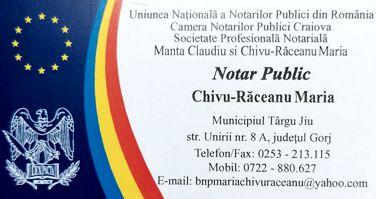 The notary public performs the following acts and notarial procedures:

•  drawing deeds with legal content at the parties’ request;

•  certifying some deeds, in the cases provided by law;

•  certification of signatures on deeds, signature specimens, as well as seals;

•  receipt into storage of goods, deeds and documents presented by parties, as well as amounts of money, of other goods, deeds or documents which were found during the inventory of succession, according to the space and utilities the notary office has;

•  acts of protest of drafts, promissory notes and cheques;

•  certification of copies of deeds;

•  making and certification of translations;

•  issuance of duplicates of the documents they drew up;

•  fiduciary activities according to law;

•  the appointment of the custodian or special curator, in the cases provided by law;

•  recording and maintaining, under law, the fingerprints of the marking special devices;

•  the certification of the procedural steps of the auctions and/or their results;

•  divorce procedure according to law;

•  liquidation of the succession liabilities with the approval of all heirs;

•  any other actions provided by law.

Notaries public may also give other legal advice in the notarial activity than that regarding the documents content they perform and can take part in preparing and drawing some notarial acts. The notary public may carry out activities as an agent of the Electronic Archive of Security Interests in Movable Property, as well as other activities than those provided by the Law no. 36/1995 of Notaries Public and Notarial Activity, under its competence.

•  the succession procedure falls within the competence of the notary public in the notarial office located in the territorial circumscription of the law court where the defunct had his last domicile;

•  if there are successive inheritances, the successors may choose the competency of any notary public who performs in the territorial circumscription of the law court where the author who passed away the latter had his last domicile;

•  acts of protest of drafts, promissory notes and cheques are made by the notary public in the territorial circumscription of the court where payment is to be made;

•  the divorce procedure falls under the competence of the notary public in the notarial office located in the territorial circumscription of the court where the marriage took place or where the last common residence of the spouses was;

•  any other situations according to law.